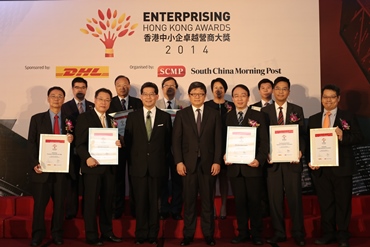 
Organised by the SCMP Group with sponsorship from DHL Express, the first Enterprising Hong Kong Awards conferred the following awards: 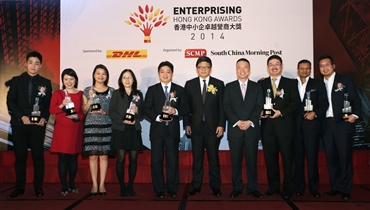 Mr. Robin Hu, SCMP Group Chief Executive Officer, remarked, “The Enterprising Hong Kong Awards is proud to be the first of its kind to acknowledge the multiple facets of operational excellence for local SMEs. As a homegrown enterprise ourselves, we hope that through these Awards, we can inspire emerging entrepreneurs and SMEs alike to continue their good work in scaling new heights.”

He continued, “All finalists must be commended for their outstanding contribution to Hong Kong’s continued prosperity. The very first winners of the Enterprising Hong Kong Awards have made history, and future candidates will look upon them as their barometer of success and source of inspiration.”

Enterprising Hong Kong Awards recognises and celebrates the SMEs and entrepreneurs whose brilliance in the business realm will serve as benchmarks for the industry and peers. The eight winners were nominated by a number of industry bodies and selected by a panel of judges comprised of respected businesspersons and industry stakeholders. Selection of the winners in Brand Excellence Award and Best Customer Service Award included panel judging as well as public voting.

First published in 1903, the newspaper has developed an enviable reputation for authoritative, influential and independent reporting on Hong Kong, China and the rest of Asia. Available in print, mobile, tablets and online through scmp.com and e-reader editions, South China Morning Post reaches a global audience with daily breaking news, analysis and opinion, multimedia articles and interactive forums. The South China Morning Post received over 160 awards in 2013-14 for excellence in editorial, marketing and technical capabilities.  Other titles in the Group include the Sunday Morning Post, Nanzao.com (南早.com), Nanzaozhinan.com (南早香港指南.com), STYLE, Destination Macau, The PEAK, HK Magazine, The List, Where Hong Kong, and Where Chinese玩儿.