SCMP Group Ltd (SEHK: 583), Asia’s leading media holding company, staged the second Spirit of Hong Kong Awards ceremony last night to venerate the altruistic kindness and resilience of eight unsung heroes. Sponsored by Sino Group, the Spirit of Hong Kong Awards garnered heart-warming societal support and once again fulfilled its mission of identifying and celebrating admirable individuals and companies who overcame adversity or helped others to do so. 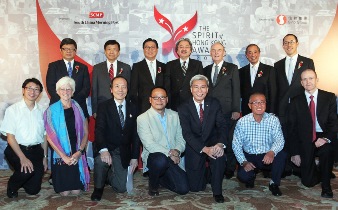 “Through the Spirit of Hong Kong Awards, and by partnering with 8 NGOs and organisations, we have unearthed rare and dazzling examples of the human spirit,” remarked Dr. David Pang, SCMP Group Chairman. “Each of the finalists and winners shine among us like diamonds. While they may not be celebrated business personalities or privileged individuals, their selfless contribution to society, their self-sacrifice to achieve greater good, their drive to preserve uniquely Hong Kong heritage, and their ambition to build upon limited resources to create enterprises or innovation for good are all captured by the Awards. We salute them for their incredible achievements.”

As part of the “Celebrating Hong Kong” campaign initiated last year, the Spirit of Hong Kong Awards is an extension of the campaign that enables the SCMP Group to continue highlighting Hong Kong’s signature unwavering spirit.

The Spirit of Hong Kong Awards 2014 winners are:

Dr. Poon Tak-lun – Personal Contribution to Community Award
Within 72 hours of the Sichuan earthquake in 2008, orthopaedic surgeon Dr. Poon Tak-lun had already flown into Chengdu and went with a team to Wenchuan to help hundreds of injured people over the next five days. There were many further visits over the following five years as Poon assisted the Hong Kong Red Cross and its local partners in Sichuan in creating a rehabilitation centre, which subsequently served more than 1800 people. Poon helped with training of medical staff and used most of his weekends and holidays to be in Sichuan. Poon has been nominated by the Hong Kong Red Cross.

Mr. David Bellis – Heritage Preservation Award
Briton David Bellis has lived in Hong Kong since 1992. He enjoys wandering around the streets and countryside of Hong Kong and making discoveries of former air raid tunnels, obelisks, fire hydrants, odd iron rings, boundary markers and other items. So eight years ago he started a blog with a few articles about what he had come across, which became the local history website gwulo.com, now a sophisticated website involving hundreds of hours of programming work by Bellis of more than 17,000 pages of heritage information. This includes thousands of old photos, sources for people looking up their ancestors to look through, and prisoner of war diaries. Bellis has been nominated by Designing Hong Kong.

Mr. Li Kam-keung – Self-sacrifice to Achieve Greater Good Award
Li Kam-keung is Hong Kong’s longest serving blood donor, having started donating blood at the age of 18 and in order to give blood on average every two weeks, he needs to be in peak condition. As of June 2014, Li, a former traffic police officer, had given 549 blood donations, the highest number made by a donor in the records for the Hong Kong Red Cross Blood Transfusion Service. According to Li’s nominator, Hong Kong Red Cross, his donations have benefited hundreds of patients. The organisation says Li should be recognised as a role model who inspires the younger generation.

Mr. Nelson Yip Siu-hong – Lion Rock Entrepreneur Award
Until the age of 16, Nelson Yip Siu-hong would spend a lot of time at home in the care of his family. With mild cerebral palsy, Yip uses crutches to get about, but at 16 decided to become more independent. Yip’s story is an inspirational one. He runs three companies, is very active in sports and has not allowed his disability to hold him back. In 1995, Yip founded Hong Kong Rehabilitation Power to assist those with disabilities. Having enjoyed horse riding, Yip was chosen for the Paralympic team in 2008 and also carried an Olympic torch.

Mr. Michael Tsui Kam-fai – Innovation for Good Award
It’s the stuff of Hollywood. A robotic hand, but with a serious rehabilitation mission. As CEO of Rehab-Robotics, Tsui created the “Hand of Hope Robotic System” in partnership with Hong Kong Polytechnic University. The system can be used by stroke survivors to aid motor recovery. By actively engaging patients in repetitive tasks, the brain is able to rewire neurological pathways – so the technology helps the stroke survivor to re-educate his or her muscles. The portable hand brace is strapped on to the human hand and rewards the patient with the desired motion as he or she activates the muscles with messages from the brain.

Mr. Leung Siu-lun – Overcoming Personal Challenge Award
Within one month five years ago Leung Siu-lun went from being a top student and very capable swimmer and sportsman, to life in a wheelchair paralysed from the waist down. His condition is known as spinal arteriovenous malformation or spinal AVM, a rare, abnormal tangle of the blood vessels on, or near, the spinal cord. But this term he’ll be starting a degree in medical laboratory science at the Hong Kong Polytechnic University. He has also become a champion fencer. Hong Kong Professional Teachers’ Union has nominated Leung as members were impressed by how Leung has managed to overcome the difficulties of his illness, and instead moved on to new endeavours.

Law Wing Kee Construction & Decoration Ltd. – Corporate Citizen Award
Peter Lo left school at 14 because his father couldn’t afford to keep him in school. Instead he went to work for his father’s construction and decorating firm Law Wing Kee. He struck up a friendship with a priest, who then employed both Lo and his father to decorate his school. Lo needed more workers so he recruited unemployed young men from a local playground who were prime pickings for the triads. Lo continued this policy and later would also pay for the evening education of some of his employees. Lo these days still follows that ethos, employing former prisoners from Stanley and training them in a skill and giving them a new start in life.

Ms. Sheila Purves – People’s Choice Award (public voting)
After she moved to Hong Kong from Canada more than 30 years ago, Sheila Purves worked as a physiotherapist and occupational therapist in the rehabilitation sector in Hong Kong. But over the past two decades much of her stellar work has been carried out on the mainland where she has overcome linguistic and cultural hurdles to teach numerous students of rehabilitation professions. With her positive outlook, Purves was able to overcome barriers and gain the trust of local counterparts. Purves has devoted her career to supporting rehabilitation services on the mainland and has been nominated by the Hong Kong Red Cross.

First published in 1903, the newspaper has developed an enviable reputation for authoritative, influential and independent reporting on Hong Kong, China and the rest of Asia. Available in print, mobile, tablets and online through scmp.com and e-reader editions, South China Morning Post reaches a global audience with daily breaking news, analysis and opinion, multimedia articles and interactive forums. The South China Morning Post received over 160 awards in 2013-14 for excellence in editorial, marketing and technical capabilities. Other titles in the Group include the Sunday Morning Post, Nanzao.com (南早.com), Nanzaozhinan.com (南早香港指南.com), STYLE, Destination Macau, The PEAK, HK Magazine, The List, Where Hong Kong, and Where Chinese玩儿.