A century ago, Western civilization was imperiled. Throughout Europe, the first world war raged on as the Allied powers orchestrated a concerted effort against continental destruction. Almost unnoticeably, hundreds of thousands of Chinese labourers were transported to the European war zones, helping to shape Europe during the Great War. 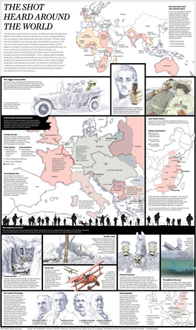 Launched to mark the first world war centenary, the special report traces these Chinese labourers’ story, the largest non-European labour contingent in the war, from rural Shandong to the European war trenches and back through archive photos, eyewitness accounts, maps and news articles published in the South China Morning Post at the time, when the paper was only a decade old.

“Chinese people directly helped save Western civilisation when the Western powers were determined to kill each other with anything at their disposal.” Xu Guoqi, historian, The University of Hong Kong

“Nearly 90 years after his death, Shandong farmer Bi Cuide’s descendants flew to France to visit his grave. The family poured Shandong liquor on the grass and left red dates from home. “We were the first in our family to finally pay our respects to him,” says a descendant of Bi’s.”

For information on syndicate rights to the China’s WWI series and other multimedia series, please contact SCMP Content Resources at phone +852 2680 8180 or email: reprint@scmp.com.

First published in 1903, the newspaper has developed an enviable reputation for authoritative, influential and independent reporting on Hong Kong, China and the rest of Asia. Available in print, mobile, tablets and online through scmp.com and e-reader editions, South China Morning Post reaches a global audience with daily breaking news, analysis and opinion, multimedia articles and interactive forums. The South China Morning Post received 65 awards in 2013 for excellence in editorial, marketing and technical capability.  Other titles in the Group include the Sunday Morning Post, Nanzao.com (南早.com), Nanzaozhinan.com (南早香港指南.com), STYLE, Destination Macau, The PEAK, HK Magazine, The List, Where Hong Kong, and Where Chinese玩儿.