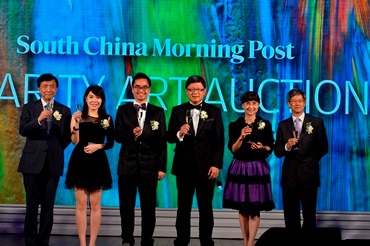 Dr. David Pang, Chairman of the SCMP Group, remarked, “As Hong Kong’s longest running community newspaper of record, it has always been our mission to give the underprivileged a voice, and to support them by fulfilling our social obligation in the role of convener, by bringing together resources and those with influence to help improve the lives of the needy. Through the inspirational power of art, we hope to kindle the spirit of charity to help raise much-needed funds to kick-start four new and impactful programmes run by our designated charities. The funds we raised today will go the distance towards helping both children and the elderly that need your help.”

The SCMP Charity Art Auction is an integral part of the “Celebrating Hong Kong” campaign which began last year to mark the 110th anniversary of the South China Morning Post. The auction proceeds will empower the disenfranchised through the following programmes:

Throughout SCMP’s 111 years of history, it has collaborated with and launched a number of community campaigns and events that pulled together society support to improve the lives of the disenfranchised, including Operation Santa Claus, a partnership between SCMP and RTHK, which has raised over HK$211 million for 190 charitable projects in the past 26 years.

First published in 1903, the newspaper has developed an enviable reputation for authoritative, influential and independent reporting on Hong Kong, China and the rest of Asia. Available in print, mobile, tablets and online through scmp.com and e-reader editions, South China Morning Post reaches a global audience with daily breaking news, analysis and opinion, multimedia articles and interactive forums. The South China Morning Post received over 160 awards in 2013-14 for excellence in editorial, marketing and technical capability.  Other titles in the Group include the Sunday Morning Post, Nanzao.com (南早.com), Nanzaozhinan.com (南早香港指南.com), STYLE, Destination Macau, The PEAK, HK Magazine, The List, Where Hong Kong, and Where Chinese玩儿.