Organised by the SCMP Group and sponsored by DHL Express, the Awards recognise and celebrate SMEs and their leaders whose brilliance defines industry benchmarks. The winners were selected by an esteemed panel of judges from nominations recommended by a number of industry partners. 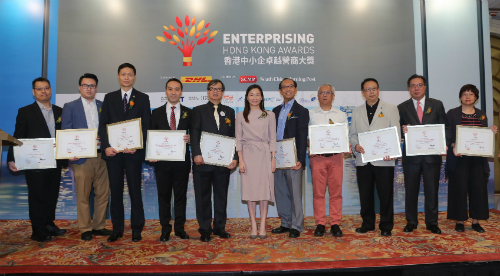 Mr Robin Hu, SCMP Group Chief Executive Officer, remarked: “The Awards were created to celebrate outstanding entrepreneurs behind numerous small and medium enterprises. It plays a vital role in underlining their critical importance to our economy. By commending the best of the best in entrepreneurship, innovation, export, branding and corporate social responsibility, the Awards strive to capture the essence of these qualities in which Hong Kong enterprises excel. This year’s finalists and winners clearly personify these virtues.”

He added: “All our finalists are the true bedrock of Hong Kong’s world-class business engine, and it is their collective effort that turns Hong Kong into one of the shiniest trade-capital of not only China, but the world.”

SCMP Group Limited (SEHK: 583) is a leading newspaper and magazine publisher in Asia. Its flagship publication, the South China Morning Post, is Hong Kong’s internationally recognised English language newspaper and has the city’s most affluent and influential readership.

First published in 1903, the newspaper has developed an enviable reputation for authoritative, influential and independent reporting on Hong Kong, China and the rest of Asia. Available in print, mobile, tablets and online through scmp.com and e-reader editions, the South China Morning Post reaches a global audience with daily breaking news, analysis and opinion, multimedia articles and interactive forums. The South China Morning Post received over 160 awards in 2014-15 for excellence in editorial, marketing and technical capabilities. Other titles in the Group include the Sunday Morning Post, Nanzao.com (南早.com), Nanzaozhinan.com (南早香港指南.com), STYLE, Destination Macau, The PEAK, HK Magazine and The List.