The students received the honours at the awards presentation ceremony on Saturday (25 Feb), which was graced by the Guest of Honour, the Honourable Rimsky Yuen Kwok-keung, Secretary for Justice, HKSAR. Solely sponsored by The Hong Kong Jockey Club for the fourth consecutive year, the Student of the Year Awards conferred the accolades on the students in recognition of their achievements in academic subjects, linguistics, sports, performing and visual arts, science and mathematics, as well as contribution to community service. The scope of the Awards was expanded this year with two new awards – “Best Devotion to School” and “Best Improvement”.

The winning students went through several rounds of stringent group discussions, auditions, interviews and other forms of assessment adjudicated by a number of subject experts. Over 650 nominated students from Form 4-6 / Grade 10-12, recommended and endorsed by their principals and teachers from over 150 schools in Hong Kong, vied for the top Student of the Year Awards glories.

In addition to the judging panels, the Awards also received guidance from the Advisory Board which consisted of the following Hong Kong leaders – the Hon. Bernard Charnwut Chan, Hong Kong Deputy of the National People’s Congress of the People’s Republic of China and Member of the Hong Kong Government’s Executive Council; Mr. Winfried Engelbrecht-Bresges, CEO of The Hong Kong Jockey Club; Mr. Lau Ming-wai, Chairman of Commission on Youth; Mr. Gary Liu, CEO of South China Morning Post Publishers Ltd and Dr. Allan Zeman, Chairman of Lan Kwai Fong Group. The Awards are also indebted to the support extended by the Education Bureau.

“The South China Morning Post continues to be proud of the small part we play each year in discovering, encouraging, and celebrating Hong Kong’s outstanding young talent, and the enviable future of this city,” remarked Mr. Gary Liu, SCMP CEO, at the awards presentation ceremony. “I sincerely congratulate the winners and nominees of this year’s Student of The Year awards. They have shown a drive to excel and a tenacity for success. But most importantly, they have shown us the ‘humanity in achievement’.” Mr. Liu encouraged students to be continuously mindful of making the world a better place through their achievements.

Ms. Scarlette Leung, Executive Director, Corporate Planning, Communications and Membership, The Hong Kong Jockey Club, addressed the students at the ceremony, “The Student of the Year Awards are about much more than winning honours. They are about passion for excellence – about students improving both themselves and their community. Youth has always been a high priority for the Jockey Club and we have launched many initiatives to support their development. We want to help young people become stronger in mind and spirit, to better themselves, and to encourage them to contribute towards the betterment of the community. So to every young person I would say – explore your passion for excellence, engage with your potential, be mindful of the needs of others, and always seek to be the best that you can be.”

The Guest of Honour, the Hon. Rimsky Yuen shared his thoughts on education at the ceremony, “Knowledge and academic excellence are very important, but quality education is not just about the pursuit of knowledge or just about the attainment of academic excellence. Quality education is also about character building, integrity, intellectual honesty, a sense of justice and also a positive attitude towards life and towards others around us.” The Student of the Year Awards acclaim this year’s winners with members of the Advisory Board, representatives from The Hong Kong Jockey Club and the Education Bureau, and Guest of Honour the Hon. Rimsky Yuen (9th from left, front row), Secretary for Justice of Hong Kong. 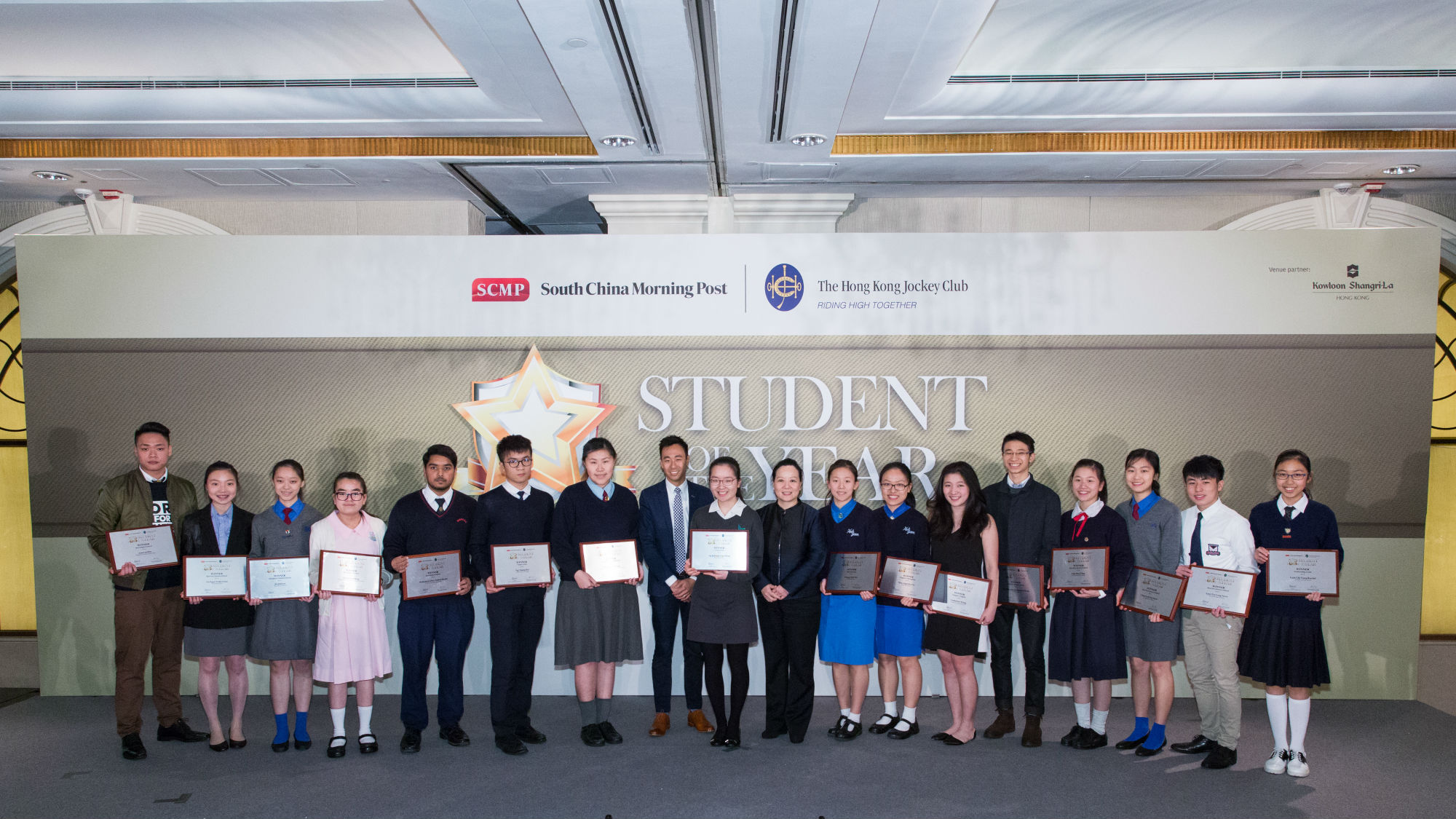 First published in 1903, the newspaper has developed an enviable reputation for authoritative, influential and independent reporting on Hong Kong, China and the rest of Asia. Available in print, mobile, tablets and online through scmp.com and e-reader editions, the South China Morning Post reaches a global audience with daily breaking news, analysis and opinion, multimedia articles and interactive forums. The South China Morning Post received 200 awards in 2015-16 for excellence in editorial, marketing and technical capabilities. Other titles in the company include the Sunday Morning Post, STYLE, Destination Macau, and The PEAK.