The “Celebrating Hong Kong” movement was initiated by the South China Morning Post to mark the paper’s 110th Anniversary, which takes place on 6th November this year. It is a shared celebration of the city, and aims to boost positive energy and constructive dialogue through a series of editorial features, partnership activities, ambassadorial support, topical seminars and more. 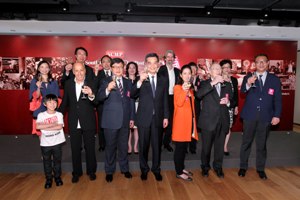 “South China Morning Post is joining hands with the people of Hong Kong to raise awareness of and take pride in what’s great about our city and our people”, said Robin Hu, Chief Executive Officer of South China Morning Post. “From our city’s culture, heritage and rich traditions to its pillars of the community, “Celebrating Hong Kong” is our way of saying we love and believe in our city.”

An important part of the “Celebrating Hong Kong” initiative is the breadth of support it has garnered from influential individuals and companies. Committed partners include Lane Crawford, MTR, Ecovision, DHL, Agnes b, G2000, Sotheby’s, Standard Chartered Bank Hong Kong, Jaeger-LeCoultre, Cathay Pacific, Hang Seng Bank, PwC and many more. Each of the participating partners will implement a programme of their own to support the Celebrating Hong Kong theme.

The South China Morning Post have an extensive plan of editorial features scheduled throughout the year, from stories of kindness and acts of humanity, to feats of engineering and other achievements, and features on treasured Hong Kong traditions and destinations.

“As Hong Kong’s trusted and authoritative English daily, our role in supporting Celebrating Hong Kong as its leading media voice is a responsibility we are proud to take on,” said SCMP Editor-in-Chief Wang Xiangwei. “We aim to tell the story of the best of Hong Kong – past, present and future; from the things we appreciate but take for granted to the inspiring individuals that have been overlooked. These things deserve to be recognized and reported on.”

“The Spirit of Hong Kong Awards celebrates the individuals and groups that represent the very best of our city, but who have not had the attention they deserve. These are those that have set positive examples through their selfless acts, their hard-working contributions to society, and their heartwarming stories of achievement against the odds” said Sir David Akers-Jones, who will chair an esteemed judging panel for the awards.

The Redefining Hong Kong debate series features seminars and conferences hosted by South China Morning Post and industry leaders. The debate series focuses on the opportunities and challenges that lie ahead for Hong Kong, from its role as a gateway to China, a panel chaired by Benjamin Hung, Standard Chartered’s CEO, to “The construction of a greener, more livable city“, a panel chaired by Paul Zimmerman, District Councillor. A further debate on “Hong Kong’s Path to 2017” will be chaired by the Hon. Ronald Arculli, (former Legislative Council and Executive Council member and former Chairman of the Hong Kong Exchanges and Clearing Ltd).

Robin Hu remarked. “In celebrating Hong Kong we must also recognise that there are many with much less to celebrate. These people deserve the kindness and charity of others, and we hope this auction will go some way to addressing the imbalance.”

First published in 1903, the newspaper has developed an enviable reputation for authoritative, influential and independent reporting on Hong Kong, China and the rest of Asia. Available in print, iPad™ and online through scmp.com and e-reader editions, South China Morning Post reaches a global audience with daily breaking news, analysis and opinion, multimedia articles and interactive forums. The South China Morning Post received 64 awards in 2012 for excellence in editorial, marketing and technical capability. Other titles in the Group include the Sunday Morning Post, the Chinese editions of Cosmopolitan, Harper’s BAZAAR, ELLE and CosmoGirl! magazines.