The Student of the Year Awards, an annual award jointly presented by the South China Morning Post and The Hong Kong Jockey Club, has recently named nine outstanding Hong Kong secondary students in recognition of their accomplishments in academics, linguistics, sports, the arts, science and mathematics, as well as community service.

These commendable winners were shortlisted from over 400 nominated students, representing the best Form 4 to 6 / Grade 10 to 12 pupils of 133 secondary schools. These students underwent various rounds of interviews and performance auditions with panels of expert judges from fields corresponding to the nine award categories. The Awards, in its 34th year, were guided by the Advisory Board whose members included Mr. Winfried Engelbrecht-Bresges, CEO of The Hong Kong Jockey Club; Mr. Bernard Charnwut Chan, Hong Kong Deputy of National People’s Congress and Member of Hong Kong Government Executive Council; Mr. Douglas Woo, Chairman and Managing Director of Wheelock and Company; Mr. Allan Zeman, Chairman of Lan Kwai Fong Group & Honorary Advisor of Ocean Park and Mr. Robin Hu, CEO of the SCMP Group. 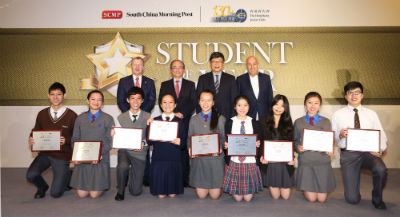 Mr. Hu remarked: “Established more than 40 years ago, the Awards serve as a capstone for students to strive for, and act as a benchmark of excellence in the pursuit of academic, sports and arts brilliance. As the community paper of record in Hong Kong for the past 112 years, the SCMP is proud to have played a part in supporting these outstanding students’ pursuits”.

Mr. Engelbrecht-Bresges said: “One of the most commendable aspects of the Student of the Year Awards is that they don’t just recognise academic excellence, but reward many different aspects of talent, ability and commitment – a philosophy we’ve always adopted in our own Hong Kong Jockey Club Scholarship Scheme. Today’s students will be tomorrow’s leaders, so it’s important they are able to view community issues from different perspectives and find innovative and sustainable means of addressing them.”

The Guest of Honour of the presentation ceremony, Mr. Eddie Ng, Secretary for Education, HKSAR Government, remarked: “Among the winners, some of them are outstanding at sports, visual arts, and performing arts; some excel in languages, science, and mathematics; while some are very much dedicated to serving our community. This is extremely important in the modern world, every successful (person) needs to balance achieving academic excellence and developing life-long interests and personal aspirations along the long learning journey.”

Eunice Yiu of St. Paul’s Convent School (Secondary Section) was named Student of the Year – Grand Prize and received a HK$25,000 scholarship. Winners of the remaining eight categories were each awarded a HK$10,000 scholarship. First and second runners-up were presented scholarships of various value.

The winners of the Student of the Year Awards 2014 are:

For more information about the awards, please visit https://studentoftheyear.hk.

First published in 1903, the newspaper has developed an enviable reputation for authoritative, influential and independent reporting on Hong Kong, China and the rest of Asia. Available in print, mobile, tablets and online through scmp.com and e-reader editions, South China Morning Post reaches a global audience with daily breaking news, analysis and opinion, multimedia articles and interactive forums. The South China Morning Post received over 160 awards in 2014-15 for excellence in editorial, marketing and technical capabilities. Other titles in the Group include the Sunday Morning Post, Nanzao.com (南早.com), Nanzaozhinan.com (南早香港指南.com), STYLE, 48 HOURS, Destination Macau, The PEAK, HK Magazine, The List and Where Hong Kong.