The Student of the Year Awards, the most prestigious secondary school event in Hong Kong, has honoured nine exemplary students at the award presentation ceremony graced by the Honourable John Tsang, Financial Secretary of Hong Kong, as the Guest of Honour on Saturday (12 March).

Sponsored by The Hong Kong Jockey Club for the third consecutive year and organised by the South China Morning Post, the Student of the Year Awards conferred the accolades on the students in recognition of achievements in academic subjects, linguistics, sports, the arts, science and mathematics, as well as contribution to community service. Celebrating its 35th anniversary, the Awards enlisted help from a number of subject experts who lent credence to the judging panels. After several rounds of vigorous group discussions, auditions, interviews and other forms of assessment, the judges considered the winning students best of the best among this year’s nominations, consisting of 460 Form 4-6 / Grade 10-12 students recommended and endorsed by their teachers from over 100 schools in Hong Kong.

The Student of the Year Awards celebrated its 35th anniversary with a new group of winners and finalists, Advisory Board and Guest of Honour the Hon. John Tsang (10th from left, back row), Financial Secretary of Hong Kong. 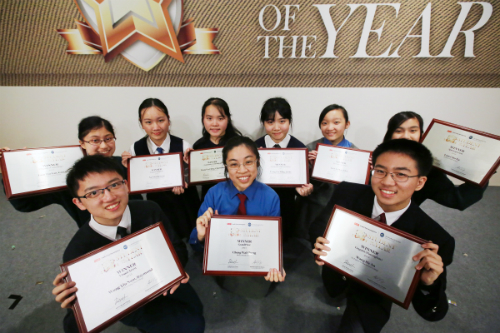 The Student of the Year Awards conferred the coveted accolades on nine winners this year in recognition of their achievements in academic subjects, linguistics, sports, the arts, science and mathematics, as well as for contributions to community service.

In addition to the judging panels, the Awards also received guidance from the Advisory Board which consisted of high-profile members including Sir David Akers-Jones; Mr. Winfried Engelbrecht-Bresges, CEO of The Hong Kong Jockey Club; the Hon. Bernard Charnwut Chan, Hong Kong Deputy of the National People’s Congress of the People’s Republic of China and Member of the Hong Kong Government’s Executive Council; Mr. Allan Zeman, Chairman of Lan Kwai Fong Group; and Mr. Robin Hu, CEO of the SCMP Group. The Awards are also indebted to the support extended by the Education Bureau.

Mr. Hu remarked, “With the Student of the Year Awards, the South China Morning Post is honoured to play a part in the discovery of Hong Kong’s very own young talent. Collectively, this year’s nominees demonstrated exceptional depth of intellect, tenacious resolve to succeed, remarkable mastery of creativity and an outstanding sense of social responsibility. These enduring qualities shall form the foundation of a prosperous Hong Kong for many more years to come. I warmly congratulate all nominees and winners of the Awards and applaud their unrelenting passion to learn and thrive.”

“At The Hong Kong Jockey Club, we see our donations as an investment in the future of Hong Kong,” said Mr. Engelbrecht-Bresges. “And there is no better investment than in our young people – the future leaders of our community. The Student of the Year Awards are an excellent example of investing in the future of our young people. I am deeply impressed by the students’ focus on excellence and their passion to achieve the very best. In fact, this ‘can-do spirit’ is the quality needed by all the future leaders of our community. All of them exemplify the passion and dedication that is Hong Kong at its very best.”

The Guest of Honour, the Hon. John Tsang shared his thoughts with students at the award presentation ceremony, “The [Student of the Year] award winners and finalists, as well as the shortlisted candidates, are already achievers. Looking at your impressive resumes, and looking, too, at the challenging path that has taken you from recruitment to nomination, from shortlisting to interviews, individual presentations and so much more, it is abundantly clear to me that the selection process has been a valuable lesson that you have not only learned, but mastered. In fact, to me, all of you are winners. You have made a difference for yourselves, for your families and for your schools. And I am looking forward to the day that you bring positive enhancements to our society as well.”

As part of the continuing effort of the Student of the Year Awards to encourage and commend exemplary students, the Awards this year issued special Certificates of Honourable Mention to four students, who have been shortlisted in two categories, in recognition of their aptitude and commitment to excellence. They are Cheng Wai-chung (Student of the Year - Grand Prize. Form 5, Diocesan Girls' School), Juliet Leung (Form 5, Heep Yunn School), Kelly Liang Huilin (Form 5, Diocesan Girls' School) and Tina Ip Shuk-tin (Form 5, St. Paul's Convent School (Secondary Section) ).

For more information about the awards, please visit https://studentoftheyear.hk/.

SCMP Group Limited (SEHK: 583) is a leading newspaper and magazine publisher in Asia. Its flagship publication, the South China Morning Post, is Hong Kong's internationally recognised English language newspaper and has the city's most affluent and influential readership.

First published in 1903, the newspaper has developed an enviable reputation for authoritative, influential and independent reporting on Hong Kong, China and the rest of Asia. Available in print, mobile, tablets and online through scmp.com and e-reader editions, the South China Morning Post reaches a global audience with daily breaking news, analysis and opinion, multimedia articles and interactive forums. The South China Morning Post received 160 awards in 2015-16 for excellence in editorial, marketing and technical capabilities. Other titles in the Group include the Sunday Morning Post, Nanzao.com (南早.com), Nanzaozhinan.com (南早香港指南.com), STYLE, Destination Macau, The PEAK, HK Magazine and The List.