HONG KONG and NEW YORK, 11 October 2017 – “Belt and Road Initiative”, a visual explainer created by the South China Morning Post, was named the Best Data Visualisation Project at the World Digital Media Awards, announced yesterday at the IFRA World Publishing Expo in Berlin. This top honour is a valuable addition to the array of over 500 accolades that the SCMP has won in the past five years.

Organised by the World Association of Newspapers and News Publishers (WAN-IFRA), the SCMP project bested all contenders from North America, Latin America, Europe, Africa, Asia, the Middle East and India for the top prize. The World Digital Media Awards recognise news publishers around the globe for groundbreaking digital products that engage readers and contribute to online growth.

“It is our honour to be conferred such a prestigious award which highlights the SCMP’s commitment to excellence in journalism,” said Ms Tammy Tam, Editor-in-Chief of the SCMP. “I’m very proud of our Graphics team for conceptualising and developing ‘Belt and Road Initiative’, a compelling visual explainer that employs digital technologies to heighten our storytelling capabilities. This project embodies our mission to engage users in innovative narratives and infographics that deepen understanding and elevate thought.” 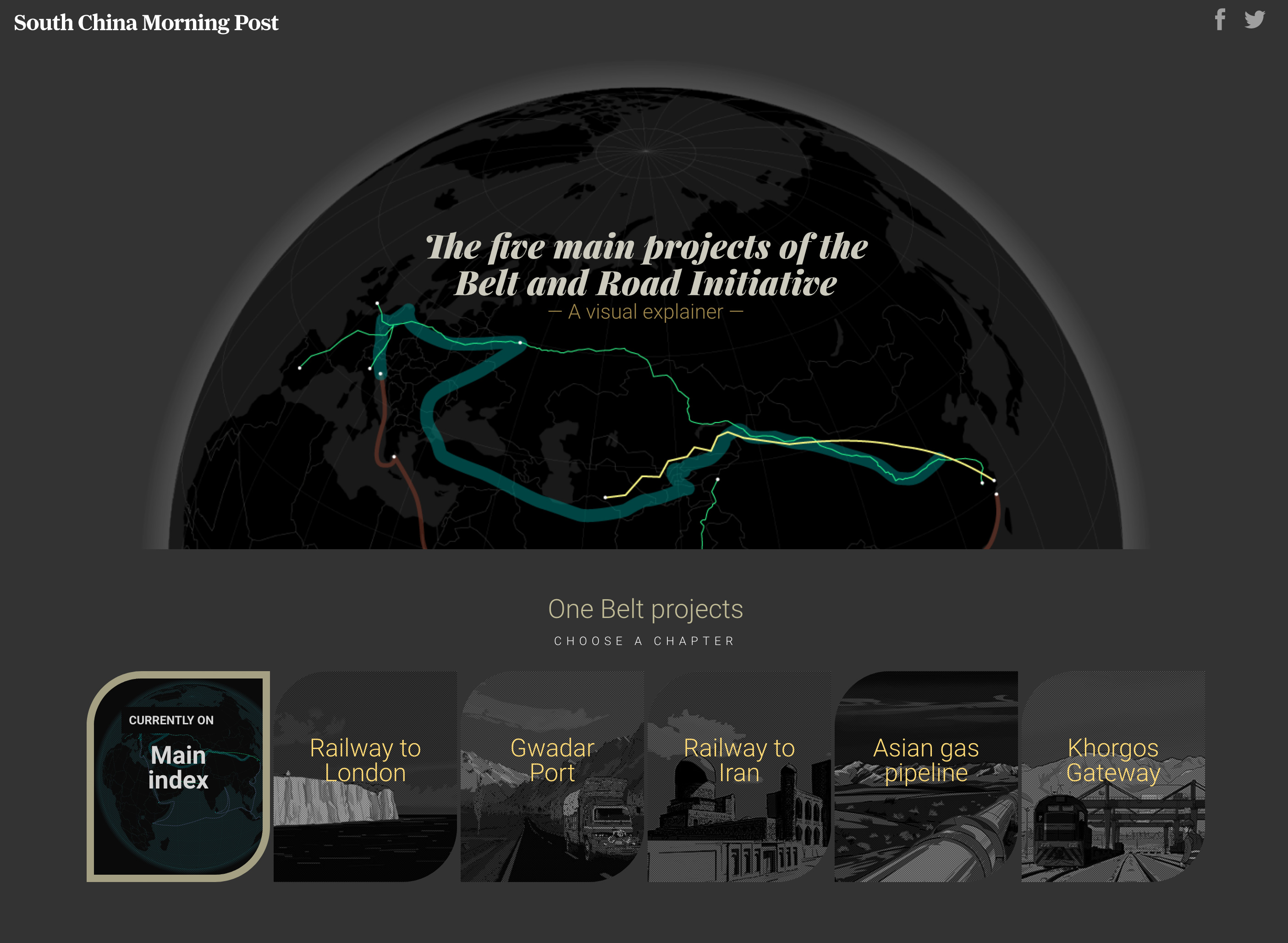 “Belt and Road Initiative” introduces readers to five ambitious projects, namely the direct rail link between China to the United Kingdom, the China-Pakistan Economic Corridor, the freight train from China to Tehran, the Central Asia–China Gas Pipeline and the Khorgos Gateway connecting Kazakhstan to China by rail.  Please click here to access the package.

On top of the recent Best Data Visualisation honour, the SCMP has amassed over 500 accolades since 2013, including regional and international awards such as the International News Media Association (INMA) Global Media Awards, the Malofiej International Infographics Awards, Society for News Design (SND) Awards, PANPA Newspaper of the Year Awards and the Society of Publishers in Asia (SOPA) Awards, among others.

WAN-IFRA is the global organisation of the world’s press. It derives its authority from its global network of 3,000 news publishing companies and technology entrepreneurs, and its legitimacy from its 80 member publisher associations representing 18,000 publications in 120 countries. (Source: WAN-IFRA website)

First published in 1903, the newspaper has developed an enviable reputation for authoritative, influential and independent reporting on Hong Kong, China and the rest of Asia. Available in print, mobile, tablets and online through scmp.com and e-reader editions, the South China Morning Post reaches a global audience with daily breaking news, analysis and opinion, multimedia articles and interactive forums. The South China Morning Post received 200 awards in 2016-17 for excellence in editorial, marketing and technical capabilities. Other titles in the company include the Sunday Morning Post, STYLE and The PEAK.