May 6, 2016May 13, 2016
HONG KONG, 5th August, 2013 – The South China Morning Post announced today the official launch of the Spirit of Hong Kong Awards, a key programme within their extensive Celebrating Hong Kong campaign this year.

The Spirit of Hong Kong Awards, sponsored by Sino Group, seeks to give recognition to ordinary Hong Kong people who have done extraordinary things. Through actions which demonstrate great integrity, inspiration or which have a positive impact on others in the community, these individuals or groups of individuals exemplify the very best of the Hong Kong spirit. 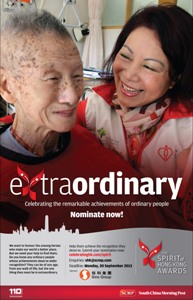 Through The Spirit of Hong Kong editorial series, the South China Morning Post are covering stories of the kindhearted, the honest, the caring and the selfless. Stories such as the tenacious and hardworking individuals who defy seemingly insurmountable physical challenges to achieve their goals will form the foundation of the nominees for the Spirit of Hong Kong Awards in November this year.

A total of ten awardees will be recognised by an esteemed panel of judges, with the same criteria of impact, integrity and inspiration. An 11th award will be given to the nominee who wins by popular vote. Nomination and voting can be accessed on the official website http://spirit.celebratinghk.com/, along with highlights some of the top stories published by the newspaper.

“Celebrating Hong Kong commemorates our 110th Anniversary, but rather than focus on ourselves, we want to give something back to the community” remarked Wang Xiangwei, SCMP’s Editor-in-chief. “We want to celebrate the uncelebrated. It is easy to give a splash to the more obvious of Hong Kong’s successes and achievements, but all too often there are unsung heroes that make up the fabric of our community that go largely unnoticed. They inspire us and their selfless contributions behind the scenes make Hong Kong the place we are proud to call home. As a newspaper with a global reach, we can share their stories beyond our own borders, as shining examples of the Hong Kong spirit.”

First published in 1903, the newspaper has developed an enviable reputation for authoritative, influential and independent reporting on Hong Kong, China and the rest of Asia. Available in print, iPad™ and online through scmp.com and e-reader editions, South China Morning Post reaches a global audience with daily breaking news, analysis and opinion, multimedia articles and interactive forums. The South China Morning Post received 64 awards in 2012 for excellence in editorial, marketing and technical capability. Other titles in the Group include the Sunday Morning Post, the Chinese editions of Cosmopolitan, Harper’s Bazaar, ELLE and CosmoGirl!, HK Magazine, The List, Where Hong Kong, and Where Chinese玩儿.